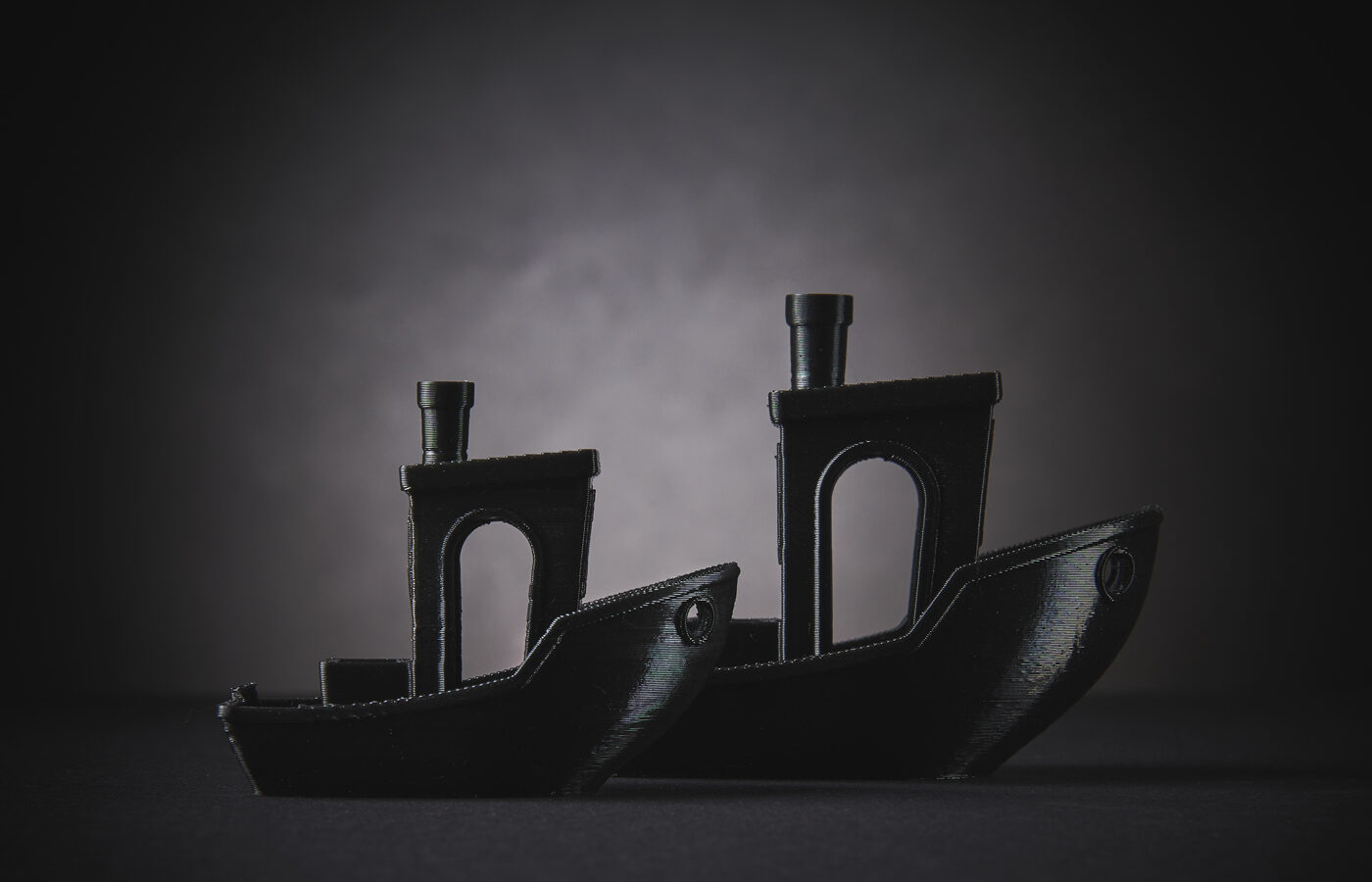 I had the pleasure of testing PLA with graphene additive from Prografen and, even at the beginning, I must admit that it’s been a long time since 3D printing using PLA gave me so much pleasure. However, let me discuss it one step at a time.

The box in which the reel with the material was packed is interesting and minimalist but, at the same time, the design has the potential to attract attention and stand out from similar products on the market. It is worth noting that it is made of recycled cardboard. The same applies to the reel on which the filament is wound, and I must admit that this was one of the positive surprises. The material used makes the reel appear a little lighter than traditional plastic reels, which results in a more efficient feeding of the material. At first, I was a little worried that during the work that the cardboard would start to wear out and sprinkle the PLA with cardboard particles. Still, I didn’t observe anything like that during printing so, for me, this is one of the advantages as it makes it easier to be recycled later.

The first printout done with the tested PLA was a temperature tower, which is good practice and should be done with any material, even from the same manufacturer, to minimise any negative experiences at a later stage. The temperature tower showed that, optimally, the material should be processed at 210°C to 220°C; however, initial tests at 210°C to 215°C either failed for various reasons (layers did not stick together, failed or poor bonding to the work surface, etc.) or the final printouts were not satisfactory in terms of model reproduction quality. When I started printing at 220°C, the problems mentioned earlier ceased to occur, which is directly related to one of the properties of graphene (i.e., good heat conductivity). Because graphene dissipates heat to the outside much faster, it solidifies much faster – which requires a higher temperature on the nozzle. Subsequent printouts of the most popular ‘Benchy’ test piece seem to confirm my observations.

Once the parameters were adjusted, printouts came out very clean. The layers joined perfectly without any signs of overlapping, creating smooth even surfaces and no ‘threading’. The material also allows for an outstanding representation of the details of the model and does not ‘lose’ dimensions or shapes (thanks to minimal shrinkage).

After Benchy printing, it was time to test the more difficult models, the so called ‘print-in-place’, where parts are movable and should remain so after printing and removing the model from the work surface. In these cases, no problems were found either. In fact, I have the impression that thanks to the conductivity of graphene, the more difficult parts (with smaller tolerances) did not fuse and did not merge into one solid. Also, it is worth noting that as far as I can observe, in the conditions of home 3D printing, PLA Graphene from Prografen has very good mechanical properties and abrasion resistance – so even after quite intensive Dragon Egg’s screwing and unscrewing, there was no deformation on the threads and the deposit formed as a result of friction between the surfaces was minimal.

Encouraged by previous successes and just out of spite – after all, something has to go wrong – I decided to see how this material would cope with the ‘Tower of Pi’ without filling. The geometry of this model makes it generally impossible to be printed properly on FDM printers due to overhangs without first adjusting and making supports so, after 11 hours of printing, I expected to find a lot of waste material. To my surprise, the model was printed well and, despite some parts being obviously not replicated or damaged, my impression of this material had become even more positive. To further test how it would cope with a large number of thin walls close together, I decided to print the ‘Tower of Pi’ again, but this time with infill. I have to say that although I expected threading, it was definitely less significant than what I had prepared for.

In my opinion, it is a great product that is likely to win many fans, and I enjoyed printing with it.

Back
We use cookies on our website to give you the most relevant experience by remembering your preferences and repeat visits. By clicking “Accept All”, you consent to the use of ALL the cookies. However, you may visit "Cookie Settings" to provide a controlled consent.
Cookie SettingsAccept All
Manage consent

This website uses cookies to improve your experience while you navigate through the website. Out of these, the cookies that are categorized as necessary are stored on your browser as they are essential for the working of basic functionalities of the website. We also use third-party cookies that help us analyze and understand how you use this website. These cookies will be stored in your browser only with your consent. You also have the option to opt-out of these cookies. But opting out of some of these cookies may affect your browsing experience.
SAVE & ACCEPT